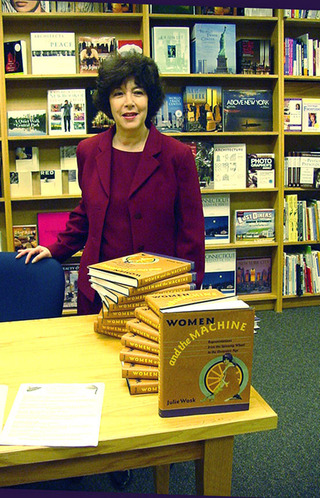 She is the author of three books: ALLURING ANDROIDS, ROBOT WOMEN, AND ELECTRONIC EVES (2008); WOMEN AND THE MACHINE: REPRESENTATIONS FROM THE SPINNING WHEEL TO THE ELECTRONIC AGE (The Johns Hopkins University Press, 2001), and BREAKING FRAME: TECHNOLOGY AND THE VISUAL ARTS IN THE NINETEENTH CENTURY (Rutgers University Press, 1992, now named BREAKING FRAME: TECHNOLOGY, ART, AND DESIGN IN THE NINETEENTH CENTURY (An Authors Guild backinprint.com edition), 2013.

She has lectured widely on technology, art, and design to academic, community, and museum audiences. She is a member of the Speakers Program sponsored by the New York Council for the Humanities, and presents fully funded talks on art and technology to not-for-profit organizations in New York State. To apply for a lecture, see nyhumanities.org.

She was the curator and writer of the exhibit "Alluring Androids, Robot Women, and Electronic Eves" which was first held at the New York Hall of Science from June-September 10, 2006 and was also shown at The Cooper Union in New York in 2008. This is a traveling exhibit of large digital images, and more information about it can be obtained by contacting her.

A native of Evanston, Illinois, Dr.Wosk has degrees from Washington University in St. Louis, Harvard University, and a Ph.D. from the University of Wisconsin. She has twice been a National Endowment for the Humanities Fellow in art history, and received early studio art training at the School of the Art Institute in Chicago and the Parsons School of Design in New York. She has twice been a fellow at the the Virginia Center for the Creative Arts, and her paintings and photographs have been exhibited at New York, Conneticut, and Massachusetts galleries.

Her articles on art and technology, literature, and design have appeared in DESIGN ISSUES, TECHNOLOGY REVIEW, TECHNOLOGY AND CULTURE, ART AND ARTISTS (London), LEONARDO, and others. She is also a painter and photographer whose works have been exhibited in New York, Massachusetts, and Connecticut galleries.

WOMEN AND THE MACHINE: REPRESENTATIONS FROM THE SPINNING WHEEL TO THE ELECTRONIC AGE (Johns Hopkins University Press). Artists and photographers, advertisers and writers reveal the impact of new technologies on women's lives.

BREAKING FRAME: TECHNOLOGY AND THE VISUAL ARTS IN THE NINETEENTH CENTURY now named Breaking Frame: Technology, Art, and Design in the Nineteenth Century. Nineteenth-century artists and designers capture the dramatic and often traumatic impact of new machines and technologies on American and European society.

“Perspectives on the Escalator in Photography and Art.” Catalogue essay for the exhibition Up Down and Across: Elevators, Escalators, and Moving Sidewalks. “ Washington, D.C.: National Building Museum/Merrell Pub. Co., 2003: 140-171.

"The Electric Eve: Galvanizing Women in Nineteenth and Early Twentieth Century
Literature, Film, and Art." Research in Philosophy and Technology 13 (1993): 43-56.

"The Impact of Technology on Art and Art on Technology: A College Course Design," in The State University of New York, The New Liberal Arts--Curriculum in Transition (Albany: State Univ. of New York, 1986): 67-71.

"Humanities and the Machine: Responses to Technology." Technology and Culture ( July 1982): 435-38. (Report on SUNY Conversations in the Disciplines Conference held at SUNY Maritime College, 1981.)

WOMEN AND THE MACHINE: REPRESENTATIONS FROM THE SPINNING WHEEL TO THE ELECTRONIC AGE (Johns Hopkins University Press, 2001).
Julie Wosk's WOMEN AND THE MACHINE tells the fascinating story of how women and machines have been portrayed over the past two centuries. From Alarming Woman Driver to Rosie the Riveter to women artists using electronic technologies today, this lavishly illustrated book captures dramatically changing social attitudes about women and their technical abilities